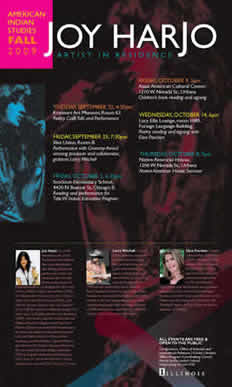 Joy Harjo is a multi-talented artist of the Mvskoke/Creek Nation. She is an internationally distinguished poet, performer, writer and musician. She has published seven books of acclaimed poetry − including She Had Some Horses (1984), In Mad Love and War (1990), The Woman Who Fell From the Sky (1994), A Map to the Next World: Poems (2000), and How We Became Human: New and Selected Poems (2003)− and two children’s books, The Good Luck Cat (2000) and For a Girl Becoming (2009). Her poetry awards include theLila Wallace-Reader’s Digest Award, the New Mexico Governor’s Award for Excellence in the Arts, the Lifetime Achievement Award from the Native Writers Circle of the Americas, and the William Carlos Williams Award from the Poetry Society of America. She has released three widely acclaimed CD's of original music and performances: Letter from the End of the Twentieth Century, Native Joy for Real, and She Had Some Horses.

All events are Free and Open to the Public